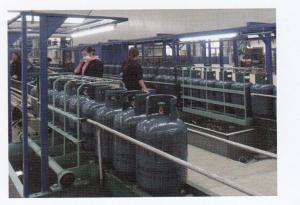 The device for cylinder do tightness test with,composed of a water tank,a lifting cylinder,a bottle feeding machine,electric control part and other parts,work a bottle feeding mechanism of automatic cylinder will send to be test station,a lifting cylinder will fall into the water,the operating personnel ratation observations of the cylinder is not leaking cylinder,after the test and the cylinder out of the water,a loop end,this machine is reasonable in structure,simple operation and maintenance.

Types of leak openings include a puncture, gash, rust or other corrosion hole, very tiny pinhole leak (possibly in imperfect welds), crack or microcrack, or inadequate sealing between components or parts joined together. When there is a puncture, the size and shape of the leak can often be seen, but in many other cases, the size and shape of the leak opening may not be so obvious. In many cases, the location of a leak can be determined by seeing material drip out at a certain place, although the leak opening itself is not obvious. In some cases, it may known or suspected there is a leak, but even the location of the leak is not known. Since leak openings are often so irregular, leaks are sometimes sized by the leakage rate, as in volume of fluid leaked per time, rather than the size of the opening.

Common types of leaks for many people include leaks in vehicle tires, causing air to leak out resulting in flat tires, and leaks in containers, spilling the contents. Leaks can occur or develop in many different kinds of household, building, vehicle, marine, aircraft, or industrial fluid systems, whether the fluid is a gas or liquid. Leaks in vehicle hydraulic systems such as brake or power steering lines could cause outleakage of brake or power steering fluid resulting in failure of the brakes, power steering, or other hydraulic system. Also possible are leaks of engine coolant - particularly in the radiator and at the water pump seal, transmission fluid, motor oil, and refrigerant in the air conditioning system. Some of these vehicle fluids have different colors to help identify the type of leaking fluid. A zinc-carbon battery is an example of an easy-leaking system; the electrolytes inside the cell sometimes leak out of the cell casing and cause damage to an electronic appliance.

The water supply system or a wastewater system in a house or other building may have a leak in any of numerous locations, causing dripping out or spillage of the water. Gas leaks, e.g. in natural gas lines allow flammable and potentially explosive gas to leak out, resulting in a hazardous situation. Leaks of refrigerant may occur in refrigerators or air conditioning systems, large and small. Some industrial plants, especially chemical and power plants, have numerous fluid systems containing many types of liquid or gas chemicals, sometimes at high temperature and/or pressure. An example of a possible industrial location of a leak between two fluid systems includes a leak between the shell and tube sides in a heat exchanger, potentially contaminating either or both fluid systems with the other fluid. A system holding a full or partial vacuum may have a leak causing inleakage of air from the outside. Hazmat procedures and/or teams may become involved when leakage or spillage of hazardous materials occurs. Leaks while transporting hazardous materials could result in danger; for example, when accidents occur. However, even leakage of steam can be dangerous because of the high temperature and energy of the steam.

Leakage of air or other gas out of hot air balloons, dirigibles, or cabins of airplanes could present dangerous situations. A leak could even be inside a body, such as a hole in the septum between heart ventricles causing an exchange of oxygenated and deoxygenated blood, or a fistula between bodily cavities such as between vagina and rectum.

There can be numerous causes of leaks. Leaks can occur from the outset even during construction or initial manufacture/assembly of fluid systems. Pipes, tubing, valves, fittings, or other components may be improperly joined or welded together. Components with threads may be improperly screwed together. Leaks can be caused by damage; for example, punctures or fracture. Often leaks are the result of deterioration of materials from wear or aging, such as rusting or other corrosion or decomposition of elastomers or similar polymer materials used as gaskets or other seals. For example, wearing out of faucetwashers causes water to leak at the faucets. Cracks may result from either outright damage, or wearing out by stress such as fatigue failure or corrosion such as stress corrosion cracking. Wearing out of a surface between a disk and its seat in a valve could cause a leak between ports (valve inlets or outlets). Wearing out of packing around a turning valve stem or rotating centrifugal pump shaft could develop into fluid outleakage into the environment. For some frequently operating centrifugal pumps, such leakage is so expected that provisions are made for carrying away the leakage. Similarly, wearing out of seals or packing around piston-driven pumps could also develop into outleakage to the environment.

The pressure difference between both sides of the leak can affect the movement of material through the leak. Fluids will commonly move from the higher pressure side to the lower pressure side. The larger the pressure difference, the more leakage there will typically be. The fluid pressures on both sides include the hydrostatic pressure, which is pressure due to the weight from the height of fluid level above the leak. When the pressures are about equal, there can be an exchange of fluids between both sides, or little to no net movement of fluid across the leak. 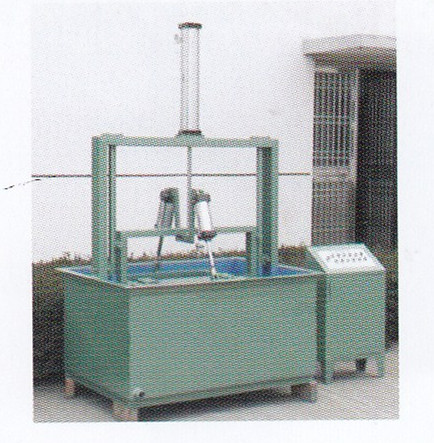